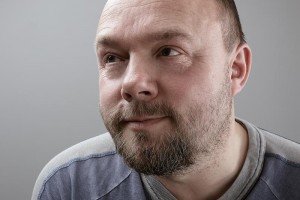 “As a painter, I am constantly dealing with the shift between the figurative and abstract. Landscape is an invaluable source of inspiration of both subject matter and motifs, but never striving to totally record what I’m seeing. My initial spark begins here, and is then taken further by adding in other elements to be described. Hence, landscape is a cypher through which to project inner thoughts and imaginations.

Regeneration of the land is a theme which runs through my work. The notion that civilisations have risen up through adversity, just to be wiped out by the force of nature, and inevitably reclaimed, is fascinating to me.

The texture I achieve in my brush work is almost chisel-like in parts, attempting to reveal the image through the many layers of paint, in the same way which a sculptor would sculpt out in marble or wood.

Taking these ideas and making art for the 21st century is a challenge, just as painting has been throughout art history. However, I feel that painting is a language just like any other. Rather than using words to describe something, paint is used in a way that’s unique to the artist. This combined with drive and passion, can result in a more original painting than initially conceived.”